Today exactly one year ago, I was in London with iMan and our eldest son. It was his last year of elementary school (in the Netherlands, children go to elementary school from roughly age 4 to 12 and then go to high school) and we wanted to do something special with him before he would start a whole new phase in his life.

It was something I picked up from other parents: take your child on a trip for a few days and have special time together. At first, I felt those parents were spoiling their children terribly, but as my children got older and I was faced with a child going to high school for the first time, I got to appreciate the symbolism of the trip. We were going to have some quality time without the other two children, in a foreign city in Europe of his choosing (within limitations of course) and we would have our own little adventure together. It didn’t hurt that it was also a great excuse for an extra trip! 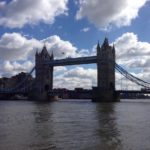 It was such a great experience for the three of us. Starting with the fact that it was the first time on a plane for us since 2007. Our son was 2,5 at the time and doesn’t remember anything about flying to San Francisco, so this felt like a first to him. We stayed two nights at a hotel where we had a room for the three of us. Son had great fun ‘gathering’ his food at the breakfast buffet in the morning. As for transportation, we took the ‘tube’; our son quickly familiarized himself with the system and found his way through the stations. Beforehand we had made a list together of the sights and activities that definitely had to be part of the programme: Science Museum, Hamleys Toy Shop on Regent Street, we went for a walk along the Thames, saw the London Eye, the Big Ben and Trafalgar Square. We ate pizza at a place called ‘Little Frankie’s’ and took a walk at night, when the sights were beautifully lit. We went to see the Tower of London and Tower bridge and went to Covent Garden and Piccadilly Circus and back to Hamleys to buy gifts.

While writing down this list I realise there are many things we did not see or do. For instance, we did not see the changing of the guards at Buckingham Palace or ride a Sightseeing bus. The main thing is, we all had a great time and for a few days I really got to connect with our soon-to-be adolescent. Who, by the way, plans to go back to London with his best friend when he’s old enough to travel by himself.

As for me…. I get to cherish the memories and I’m already looking forward to next year, when it’s our daughter’s turn to go on a trip!

2 thoughts on “Travelling with one out of three – London”